Scoutmaster John Douglas has been recognized with the following awards:

Scoutmaster Award of Merit in 2005
The Scoutmaster Award of Merit may be earned by a Scouter who meets the following requirements. Have a record of; Development of boy leadership through the patrol method. Positive relations with the troop’s chartered organization, An extensive outdoor program including strong summer camp attendance, A positive image of Scouting in the community, A troop operation that attracts and retains Boy Scouts . The following must be attached to the application form; A statement by the senior patrol leader on behalf of the patrol leaders’ council and the troop committee chairman attesting to the nominee’s performance as Scoutmaster.

Leadership Training Award in 2007
Denotes three year served in the top adult leadership position in a given unit or job. Requirements vary, depending on position, but all requirements basically amount to creation and/or maintenance of a quality scouting program.

National Hall of Leadership Award in 2010
The National Hall of Leadership was created as part of our 100th Anniversary Celebration to gather powerful stories and share the significant and positive impact Scouting leadership has on the quality of life in the communities we serve. And, wow, more than 7,000 nominations shared amazing and inspiring stories! All nomination stories will be part of the BSA 100th Anniversary archive at the National Scouting Museum. One individual was selected from each council to represent all the nominees of their council and the gift of leadership given by the Scouts and scouters of that council to the communities they serve each year. There are about 296 Councils.)

More information on the above mentioned awards:

The Silver Beaver Award is the council-level distinguished service award of the Boy Scouts of America. Recipients of this award are registered adult leaders who have made an impact on the lives of youth through service given to the council. Introduced in 1931, the Silver Beaver is an award given to those who implement the Scouting program and perform community service through hard work, self sacrifice, dedication, and many years of service. It is given to those who do not actively seek it.

The following information was submitted to the Long Beach Area Council as part of John Douglas’ nomination for the Silver Beaver Award which he received in 2006.

John Douglas became a Boy Scout in 1966 at the age of 13. He has been active as a Scout and Scouter ever since. John grew up in Elmhurst, NY, a suburb of Queens. The Scoutmaster of Troop 17 was Ralph DeFalco. He had been an adult Scouter for 20 years when John joined the troop. Through Scouts John was introduced to camping and high adventure. His scoutmaster was a stabilizing influence in John’s life, a coach and someone who was always there to support his Scouts. When John went off to college in 1971 he became an assistant scoutmaster with his troop and would join them whenever possible on campouts. He continued in that position until 1984.

In 1984 John’s employer sent him to Southern California on a temporary assignment—in March. The weather was so nice and he enjoyed his new surroundings so much that he negotiated a permanent assignment here.

The only thing that was missing from his new life in California was his involvement in Scouting. He continued to support his old troop in New York and would go on outings with them whenever he was back in that area on work assignments. But it wasn’t the same as being actively involved in a local troop.

In 1986 he approached the Long Beach Area Council and offered his service as a scoutmaster or assistant scoutmaster to any troop that would have him. The council didn’t offer any contacts, but fate soon intervened. John dropped by a Baskin Robbins ice cream parlor one evening and bumped into a group of Scouts in uniform. He introduced himself and asked them a few questions and discovered that the boys’ troop had recently lost its scoutmaster.

And so, John Douglas began his long association with Troop 212. He volunteered to be the new scoutmaster, but there was some hesitation because no one in the troop knew much about him. Another father volunteered, but he had very limited knowledge of the Scouting program. An arrangement was worked out whereby John served as assistant scoutmaster in charge of the program. That arrangement lasted for the next nine years and John established his credentials. When the scoutmaster stepped down in 1995, John was elevated to that position, where he has remained to the present.

When John joined Troop 212 in 1986, there were 24 Scouts registered in the troop, 12 of whom regularly showed up for meetings, and six of whom owned Scout uniforms. That same year John invited another troop that had recently lost its scoutmaster to merge with his, thereby increasing the size of the troop. John proudly points to the fact that Troop 212 has earned the Quality Unit designation every year since he joined it. Troop 212 has produced 101 Eagle Scouts since it began in 1954, approximately 60 of them in the last 20 years that John has been involved.

One element of his love of the outdoors is his expert horsemanship. He started riding when he was seven years old. In 1992 he was able to merge his Scouting activities with his knowledge of horsemanship when he created the wrangler program at Camp Tahquitz. He spent ten weeks at camp building a corral, shelters and the program. The council didn’t have the funds to support the effort, nor much enthusiasm for it, so John secured donations of lumber and arranged with a Girl Scout camp across the road from Camp Tahquitz to make it a joint operation. The Girl Scouts provided the horses and John provided the program and facilities. He convinced 20 different adults from his troop to spend one week at camp with him—two per week—to help out. The effort was a success and the wrangler program at Camp Tahquitz continues to this day.

John meets with Scouts and their parents nearly every night of the week for junior leader sessions, advancement counseling, scoutmaster conferences, program planning, and committee meetings. He goes on every outing with the troop and enjoys the active support and involvement of a large number of adults in his troop. In 2002 John decided to share his Scouting knowledge with other troops when he volunteered to be the council Roundtable Commissioner, a position he still holds. Just last December John received the Scoutmaster Award of Merit.

John Douglas feels the need to help later generations gain the lessons and benefits that he received as a youth in New York. When asked why he does it when he has no children of his own, he responds that the boys in the troop are his kids. His long association with the same troop has allowed him to see successive generations of Scouts grow to adulthood. John enjoys the family camaraderie of the troop and maintains contact with many of the Scouts that have gone through the troop. He says that he is only four years away from having the son of one of his earlier Scouts join Troop 212, thereby truly initiating a second generation.

An interesting coincidence is the fact that John Douglas and Troop 212 were born within a couple days of each other in May of 1954. 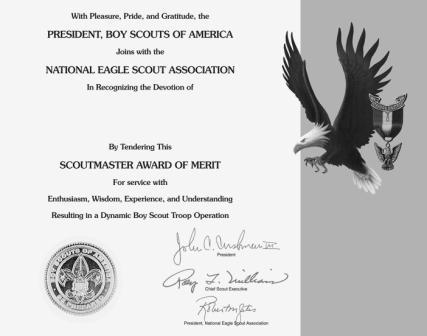 Shortly after the National Eagle Scout Association was established in 1972, it began to make available a NESA Scoutmaster Award. The award was presented to one Scoutmaster per BSA area each year. These Scoutmasters’ records demonstrated proper use of Boy Scout advancement, and a significant number of their Boy Scouts attained the Eagle Scout rank. This award was discontinued on December 31, 1987. The President of the Boy Scouts of America requested that NESA convert its award into a Scoutmaster Award of Merit which could be earned by all Scoutmasters. His rationale was that there is a need for recognizing a man relatively early in his work as a Scoutmaster, prior to his qualifying for the Scouter’s Key.

The following information was submitted to the National Council as part of John Douglas’ nomination for the National President’s Scoutmaster Award of Merit which he received in 2005.

From the Committee Chairman

Beyond the stated requirements, Scoutmaster Douglas provides the backbone of the troop with rock solid stability as scouts and parents graduate through. Support for the program is enlisted from parents. The level of this support fluctuates from year to year with ever-changing demographics. In good years the scoutmaster’s job is fairly manageable. In the off years Scoutmaster Douglas adjusts to fill in the gaps in order to maintain the same high quality program the boys come to expect.

Every year a summer camp is included in the calendar. Typically, every other year is spent at a Camp Tahquitz. On the odd year the troop travels to a distant camp in northern California, Oregon or Arizona. Rail transportation was used one year and was a great change of pace. Every four or five years Scoutmaster Douglas organizes a surprisingly inexpensive trip to Washington D.C. to attend Veteran’s Day ceremonies at Arlington Cemetery and to spend several days visiting the many cultural sites some of them quite high on the social scale. Of course transportation for this trip is by air.

Scoutmaster Douglas makes it a point to attend every scouting event. This includes more than general meetings and outings: Eagle projects, Courts of Honor, eagle boards, adult support meetings, junior leader meetings, counseling for scouts and for parents, fund raisers, Council meetings – to the point of participating in some scout related activity nearly every day of the week.

Guided learning, disguised education – whatever you wish to call it, Scoutmaster Douglas’ focus is on giving scouts the discipline, morals, confidence and leadership training scouting and the patrol system offers and that are not found elsewhere. It is presented in a manner that motivates scouts to reach the goals with enthusiasm and exemplify what scouting stands for.

From the Senior Patrol Leader

If anyone deserves the National President’s Scoutmaster Award of Merit, it is definitely Scoutmaster Douglas of Troop 212. He inspires the boys in our troop to really get into scouting and live the scout law. No one I know of is more devoted to scouting. This devotion enhances the scouting experience for all of us in Troop 212.

In one of my scouting experiences, I had the opportunity of visiting another troop and attending summer camp with them
. Perhaps one of the most prominent differences between this troop and ours is the relationship between scouts and scoutmaster. In my experience in typical troops, the scoutmaster is completely in charge and makes all the decisions. The case was true with the troop I visited. The scoutmaster made decisions and used his junior leaders to enforce the decision. Troop 212 is completely different. It is because of this difference that more of our scouts are inspired achieve Eagle rank, well above the national average for scout troops.

Instead of making the decisions, Scoutmaster Douglas relies on junior leaders like me to make the decisions in our troop. We are a boy run troop, and our scoutmaster, along with his Badger (adult) patrol, are there if we need any help. Reliance on us to make the decisions creates a trusting bond between scout and scoutmaster. We know that we can rely on our scoutmaster if we need anything, and he knows he can rely on us to make adult decisions in running our troop. Through this boy run method, all scouts get the opportunity to help and interact with the program. Perhaps this is the reason that we have one of the biggest troops in Long Beach and why a boy usually stays after entering in the program.

Through his unselfish devotion to scouting, Scoutmaster Douglas has made scouting a valuable experience for every spout to join the troop. He is valued as a leader and friend. It is hard to imagine anyone more deserving of the National President’s Scoutmaster Award of Merit. Please give this nomination your consideration.